Baku is Azerbaijan’s scientific, cultural, and industrial capital. Baku is also known as the ‘City of Winds.’ The people here and their culture are amazing, and anyone who travels to this place will be awed by it. It also has many museums, namely, the Baku Museum of Modern Art and the Azerbaijan State Museum of History, notably featuring historical artefacts and art.

Indeed Baku is becoming one of the Caucasus region’s most well-known tourist attractions. Oil Rocks, Fountains Square, the One and Thousand Nights Beach, and Shikhov Beach are famous tourist destinations. From an architectural and historical standpoint, every affluent, colourful Azerbaijan area may draw tourists.

However, Baku stimulates travellers with its magnificent views. The Guinness Book of Records, Baku became home to the world’s highest flagpole on September 2, 2010, at the inauguration of National Flag Square. It has many prominent international hotel chains. See the wonders of Skyline Trail, Breton National Park.

Why Baku is a must-see tour destination

Palace of the Shirvanshahs 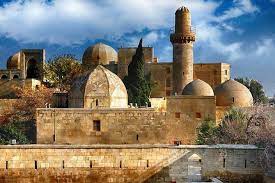 When you search for things to do in Baku, the Palace of the Shirvanshahs will come up first. So naturally, this draws the attention of people arriving in Baku. The Palace of Shrivanshahs is Baku’s most important monument. It is a 15th-century palace, built by Shrivanshahs kingdom who ruled from 861-1538.

UNESCO has dubbed the Palace of Shrivanshahs as “one of the pearls” of Azerbaijan’s architecture. The palace’s main structure, Divanhane, the burial-vault, the shah’s mosque with a tower, Seyid Yahya Bakuvi’s tomb, a gateway in the east – Murad’s gate. Also, a reservoir and the remains of the bathhouse are all located inside the complex. Shirvanshahs Palace has fantastic architecture. See the top reasons to visit Baku on your next vacation, 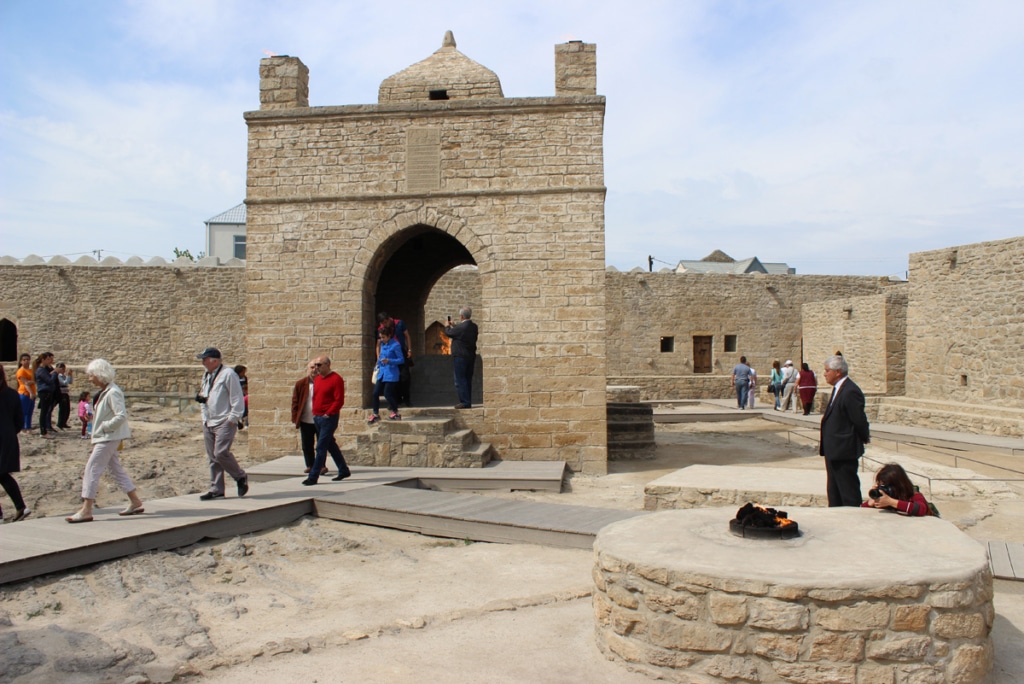 Surakhani, near Baku, is home to the Atashgah Fire Temple, also known as the Baku Fire Temple. This castle-style temple was a proposed UNESCO World Heritage Site designation in 1998. Also, the Azeri President proclaimed it a historical-architectural reserve in 2007. Unlike suggestions that the site was a Zoroastrian shrine, the inscriptions in either Sanskrit or Punjabi state that it was a Hindu shrine. However, it is no longer a temple but now a museum.

National Museum of History of Azerbaijan 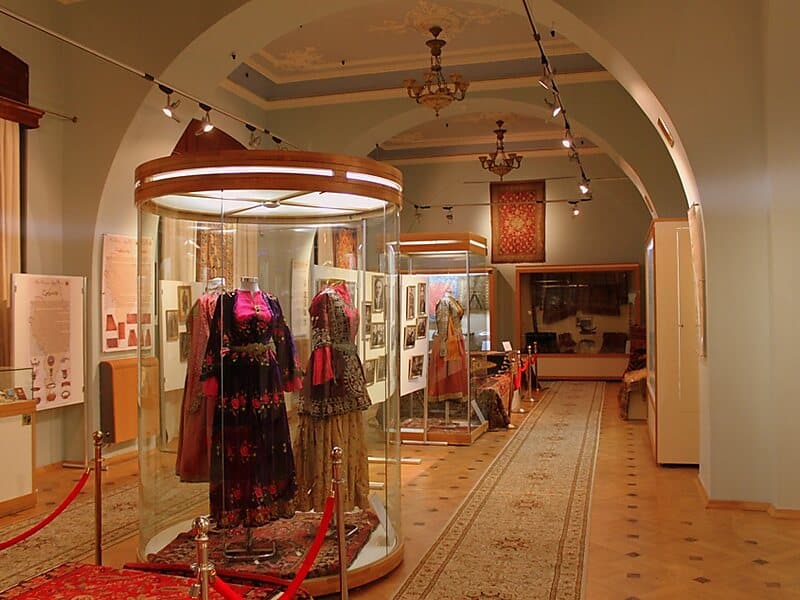 It is Azerbaijan’s largest museum, located in Baku and established in 1920. In some regions of the building, there are four levels. Two main ballrooms are on the second level of Taghiyev’s house, side by side. One is based on Oriental (Mauritanian) design, while the other is an Occidental design.

According to pictures from around 90 years ago, Taghiyev’s wife’s boudoir (private sitting room) was one of the most ornate chambers. In this room, all of the moveable furniture and artwork have vanished. Only the magnificent mirrored mosaic ceiling survives now. The museum now houses around 2000 exhibits. 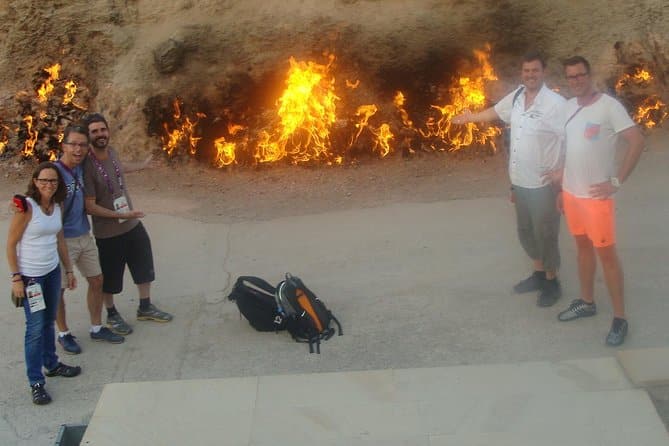 The thousand-year-old mountain of Yanar Dagh has never stopped burning. Even when it rains, the natural gas vents ensure that blazing flames erupt out of the sides of this hill. 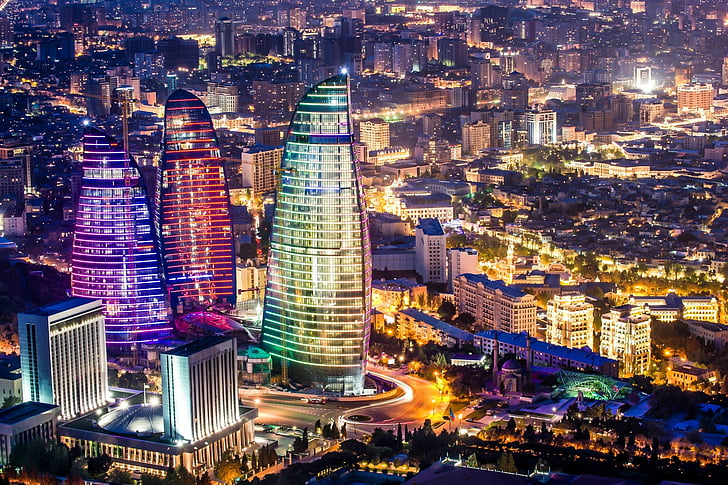 The Flame Towers in Baku, Azerbaijan’s highest building at 620 feet, are truly a must-see. There are three structures: south, east, and west. More than 10,000 high-power LED lights transformed the façade of the three Flame Towers into massive displays.

Hence, the Flame Towers Illumination design is of course one of the greatest in the world. The LED panels that cover the Flame Towers depict a fire from the farthest reaches of the city. The flaming buildings contain residences, workplaces, and hotels. Find out the most visited mosques in the UAE. 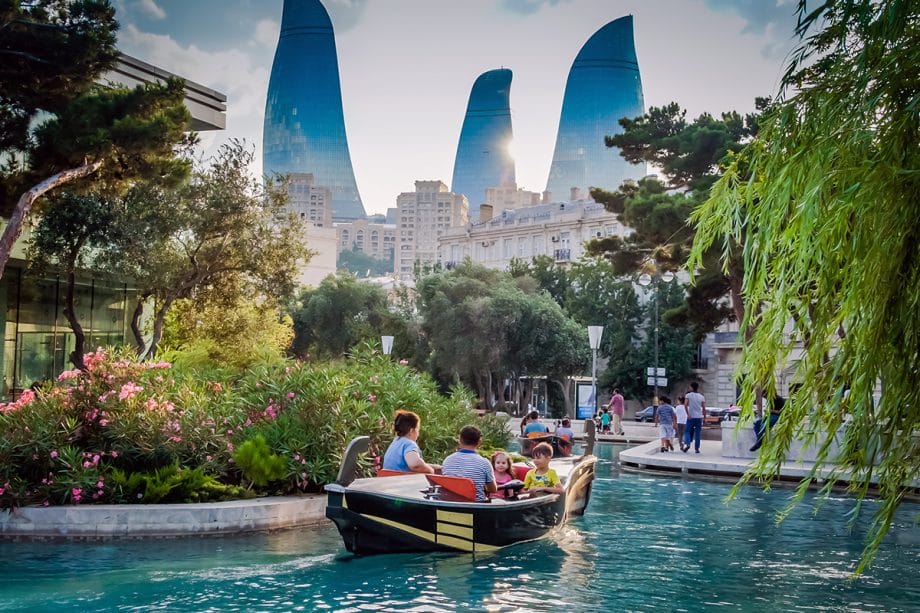 Little Venice is a small village in Baku built in the 1960s. Little Venice is the city’s most charming neighbourhood. Inspired by his trip to Venice, Italy, in the 1960s, Baku Mayor Alish Lambaranski sought to create a comparable experience in Baku.

However, the recent expansion of the current canals was as part of the renovation of this little Venetian village. Additional bridges and two magnificent restaurants have been built, further enhancing your experience. One restaurant specializes in Western food, while the other specializes in Eastern cuisine. Also, you should take a boat trip here. 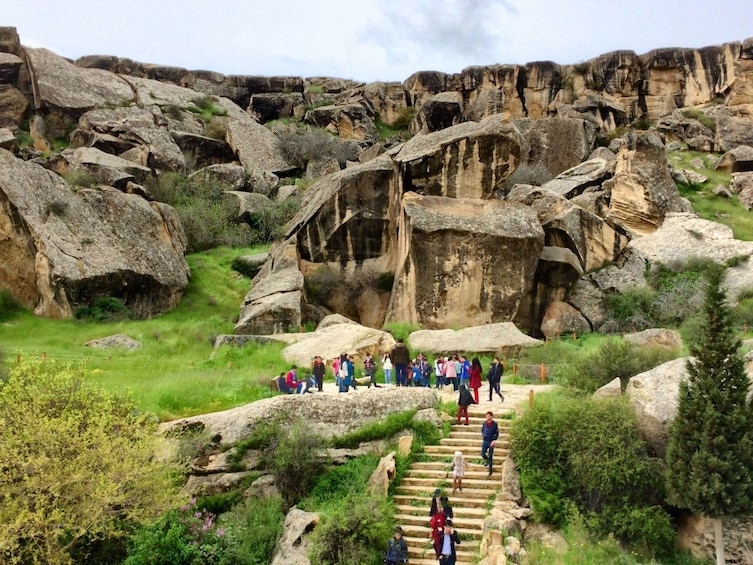 On the west bank side of the Caspian Sea, Gobustan National Park lies about 64 kilometres southwest of Baku. This hill and mountain location in Azerbaijan, located near the southeast end of the Greater Caucasus mountain ridge. Its location is in the Jeyrankechmaz River’s basin, between the rivers Pirsagat and Sumgait.

Many, sometimes rather deep ravines, crisscross Gobustan’s land. The rock paintings of Gobustan are well-known. Also, these drawings are 40,000 years old. However, there is a conception that Gobustan is the site of the first settlement of humans in Azerbaijan. Ancient people’s activities reflect dance routines, hunting scenes, woodworking, and animal representations.

How to Get There