NORWEGIAN FJORDS AMAZING CRUISE FOR YOU.

Norwegian fjords are wonders of how nature takes shape. The artistic beauty will truly never cease to take our breaths away. This rare and magnificent Norwegian fjords has incredible and beautiful landscapes. Interestingly, it’s called a fjord.

Consequently, when you think about fjords, the first thing that comes to mind is Norway. Thus, fjords, a derivative of an ancient Viking phrase, is of course arguably the most famous Norwegian word.

However, there are more than 1,000 fjords around Norway. Glaciers that exist below sea level shaped the fjord. They are U-shaped, long and deep with numerous extensions. Although, some extensions are even more famous than the main fjords, hence, a source of confusion for many tourists. Check out the Great Barrier Reef and white Heaven Beach, Australia. 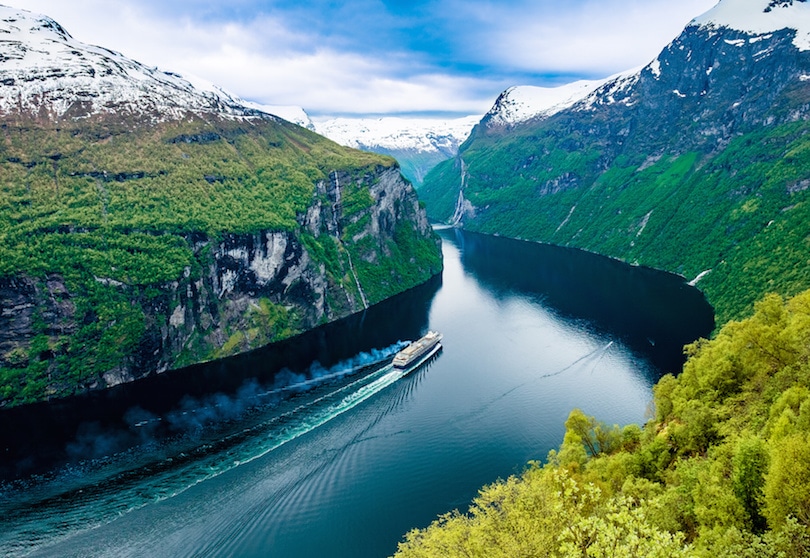 The Gierangerfjord, listed as a UNESCO World Heritage Site, is a beautiful stretch of water. Consequently, it is considered arguably the most beautiful fjord on Norway and the planet.

Gierangerfjord is close to the beautiful city Alesund. With its deep azure water, abundant waterfalls and high rising mountain tops, indeed this fjord is a fairytale scenery come true.

However, there is a lot of tourist attraction around this region. The Seven Sisters waterfall, the Bridal Veil and the Suitor are all located within this region. Also see the majestic, snow-covered mountain peaks, wild waterfalls and lush, green vegetation of the Geirangerfjord. 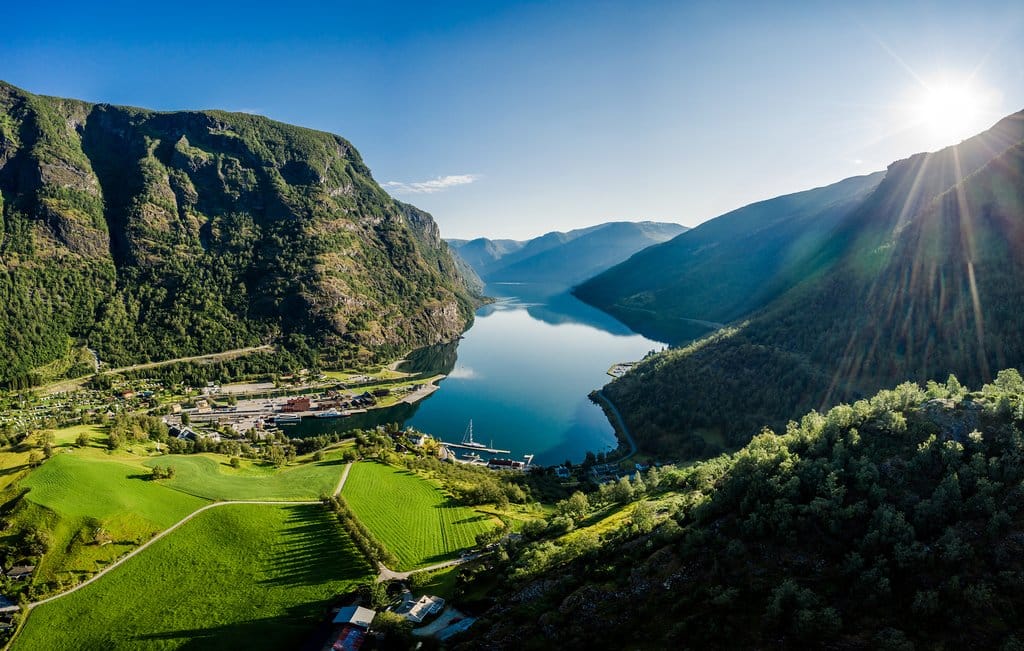 The Sognefjord is commonly known also as “King of the Fjords”. However, it is Norway’s most profound and indeed the longest fjord with a depth of 1300 meters and 205km.

It has smaller arms, Aurlandsfjord and Naerøyfjord, thereby going off to the North and South. So for tourists looking to explore Norway’s true wilderness nature, Sognefjord is indeed the best destination. 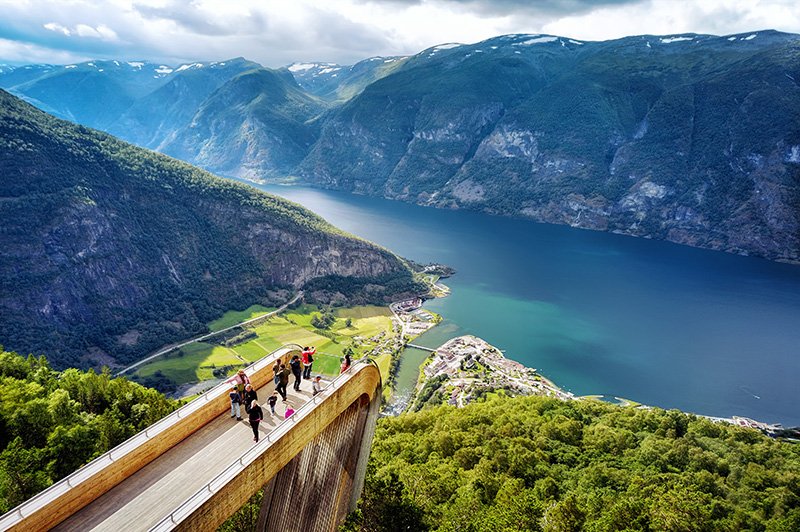 These fjords are a branch of the Sognefjord. The Aurlandsfjord is narrow and deep with a beautiful landscape. This fjord houses a railway line called Flam, a tourist destination for tourists who wish to combine a fjord cruise and a trip on the railway.

However, the Naerøyfjord is considered one of the most beautiful fjords in Norway. It is also a UNESCO World Heritage Site. 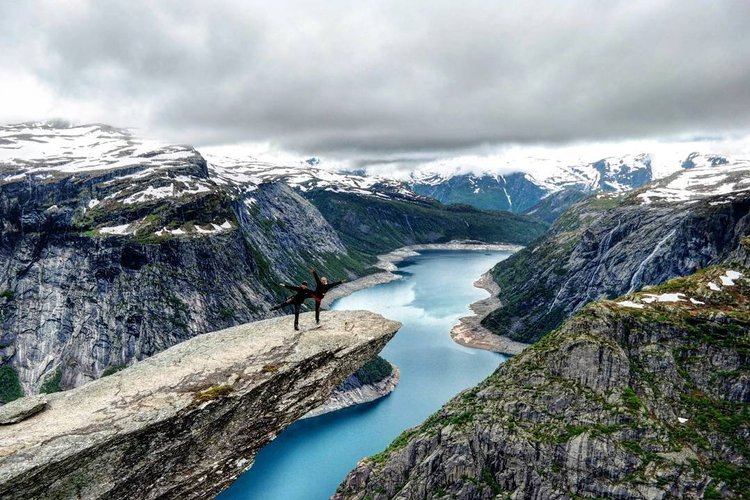 The Hardanger fjord is the second-longest fjord in Norway and one of the longest on the planet. It stretches 80km south from the Atlantic to Odda! And 179 km further into the land.

However, the fjord is famous for its hiking trail. Also, the hike will take tourists and local hikers up to Trolltunga, a rock formation standing at 1100m above sea level, to the Steinsdalsfossen waterfall and also the Folgefonna glacier.

However, these hikes are only open between June and September as the hike trails are inaccessible at other times. 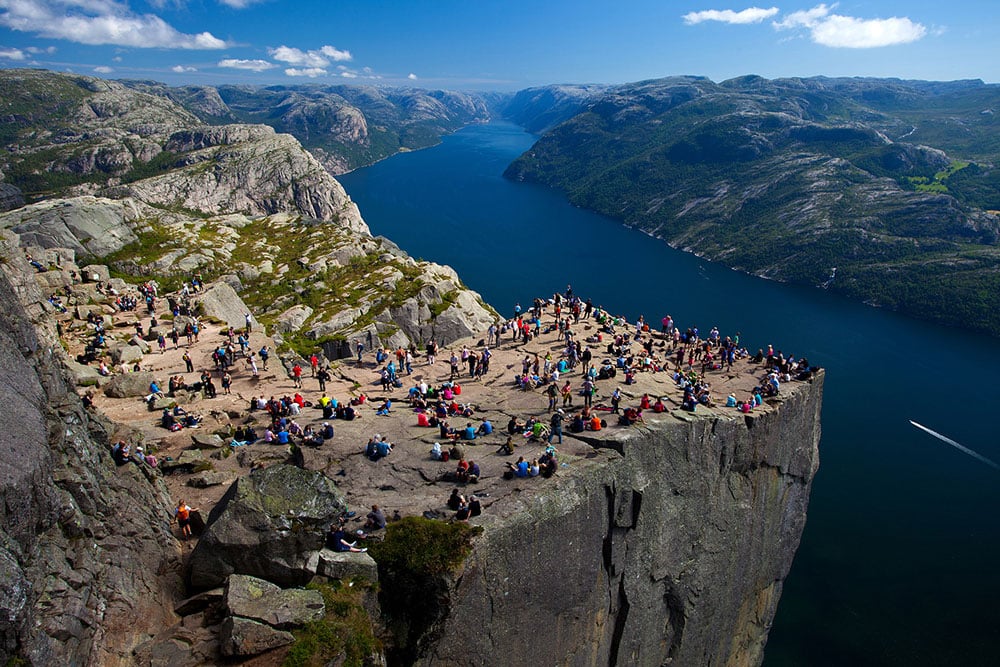 Lysefjord houses the Preikestolen, the Kjerag Boulder and the longest wooden staircase at Flørli. Thus this fjord is known for its uniqueness and beauty. Although not the largest fjord, it makes up for it with its stunning beauty.

The length of the cruises can last from seven to fourteen nights.

BEST TIME TO GO ON A CRUISE

However, the best time to go on a Norwegian fjord cruise is between May to September and June to August. Cruising this time is because of the pleasant weather conditions.

Additionally, tourists who wish to experience the Northern lights while cruising on the Fjords should visit from November to January, known as the darker months of the year.

Namely, these are the best fjord cruises to take:

On the other hand for tourists who want to book a small ship for their fjord cruise, the best small shops include:

Namely are the best fjord cruises:

These are also the famous ports of call for a variety of cruise lines. Namely are the ports:

TIPS FOR GOING ON A FJORD CRUISE

Must See In Abu Dhabi 10 Most Interesting Places.

HALLOWEEN INTERESTING FACTS THAT WILL SHOCK YOU.