FIVE MOST BEAUTIFUL AND FAMOUS WATERFALLS IN ICELAND.

FIVE MOST BEAUTIFUL AND FAMOUS WATERFALLS IN ICELAND.

One unspoken reality in Iceland is the magnificent waterfalls orchestrated naturally. The unique beauty of each waterfall in size and the uniqueness of nature around each waterfall is simply breathtaking. Iceland is the birthplace of many stories and folk tales. Every native waterfall in the land of ice and fire has vital historical and traditional significance. Iceland prides itself on having an abundance of glaciers and an abundance of attractive, bizarre and jaw-dropping waterfalls. Today, we’ll talk about the top five most beautiful and famous waterfalls in Iceland. 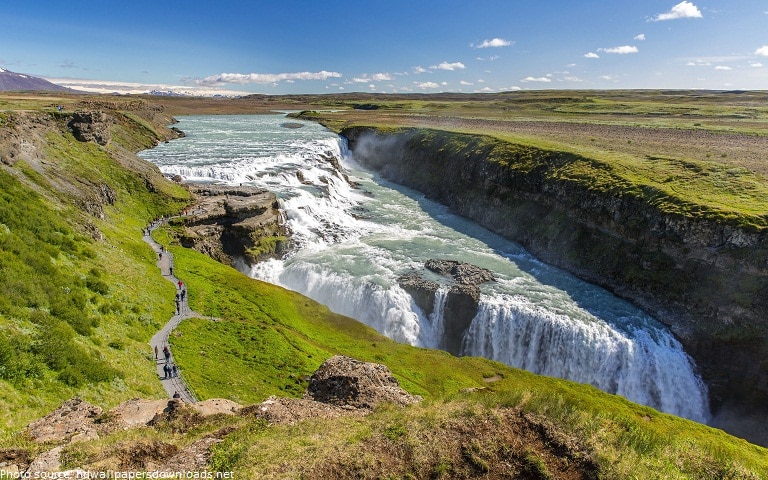 The Gullfoss, also known as the golden waterfall, is a jewel of Iceland. The Southwestern part of Iceland is where you can locate the Gullfoss. This waterfall completes the Golden Circle as one of the three most popular tourist attractions in Iceland. The melting Lángjökull glacier feeds the waterfall. Its short distance (about an hour and a half drive) from the country’s capital city of Reykjavik makes it so popular. It is a very popular waterfall. In sunny weather, visitors can even experience the shower effect of this beautiful waterfall. Due to its fame, it’s always filled with people.

Consequently, visitors should always stay behind the barrier to avoid falling into deep water due to the pulsating flow. There is no entrance fee to this waterfall. The waterfall is accessible all year round, although the lower paths are not accessible during winter. After walking a short trail of about 1.1miles to the top of the waterfall and enjoying the sights, visitors can shop for souvenirs at the gift shop, enjoy Icelandic meals at the cafeteria or go river rafting in the nearby rivers.  Open the link to see the guide on visiting the Gullfoss waterfall. 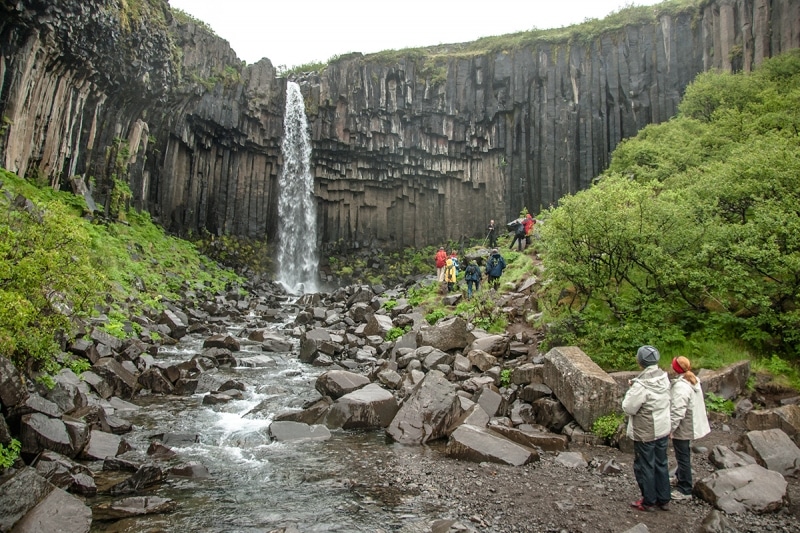 Svartifoss means “black water.” The surrounding dark lava columns inspire its name. The waterfall location is in Skaftafell in Vatnajökull National Park in Iceland and is one of the most famous sights in the park. Melted water from the Svinafellsjokull glacier feeds the waterfall. The Savatifoss has the features of nature and steaming white water. It is a magnificent and stunning waterfall, and it got its name from hexagonal black basalt.

This peculiarity of this waterfall makes it a national feature. Moreover, it inspires Icelandic architects with the ceiling design of the National Theater, Hallgrimskirkja church in Reykjavik and a famous sculpture work named “Milestones” done by Richard Serra (a renowned Icelandic sculptor) modelled after it. There is no entrance fee required to visit the waterfall, although visitors who wish to camp will pay a moderate cost. The hike to the waterfall from the park entrance across a slightly uphill trail takes about 45 minutes. Kindly open the link to see the amazing Skyline trail. Panoramic is a one-word description for this waterfall. Shaped like a horseshoe, the sheer beauty of the “waterfall of the gods” will amaze you. Godafoss is one of the most famous waterfalls in Iceland, and it is a part of the diamond circle. Therefore, this beauty is a powerful historical landmark. Its meaning is so deep and overwhelming because it is a symbol of the status of Christianity in the Icelandic country. According to folklore, the chief Þorgeir Ljósvetningagoði threw the Norse gods idols down the waterfall, ending the worship of these idols.

The location of this waterfall is in the Northern part of Iceland. Godafoss is one of the best places to experience the northern lights of the aurora borealis. For the best experience, plan your visit between October and March. The waterfall is open throughout the year and no charge for entering the waterfall. Visitors should keep in mind to bring a picnic lunch or snack, wear hiking shoes if they plan on walking around and get a dry bag for their camera gear. Also, be careful of the trails because it is slippery. 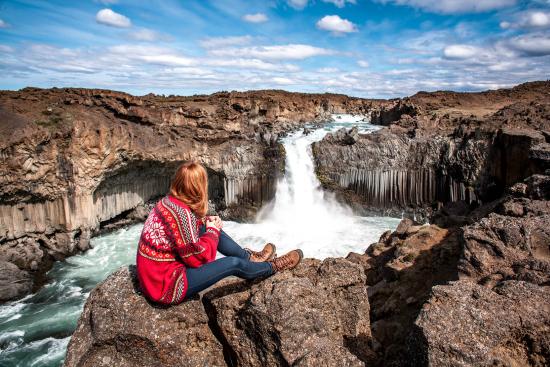 Aldeyjarfoss, meaning Aldey Island Fall, dot its name from Aldey Island. The Aldeyjarfoss waterfall is one of the most beautiful waterfalls in Iceland. Located in the Skjálfandafljót River in Northern Iceland. Although, this waterfall, set in beautiful basalt columns, looks like the train of a heavenly bridal dress. It has the perfect lighting for photography. Its location is off the highland of Iceland, so it doesn’t get many visitors. Hence there is a reward for tourists ready to drive to this waterfall the scenic sight of a beautiful waterfall. 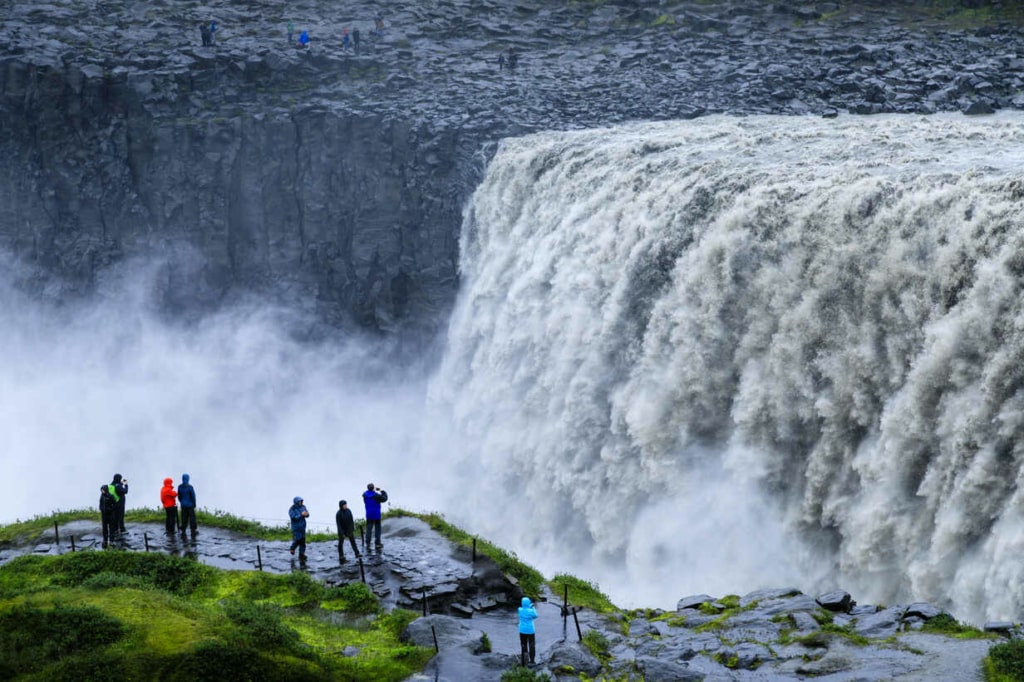 The name of this waterfall, Dettifoss, can be loosely translated to The collapsing waterfall. Dettifoss, located in North-Eastern Iceland. It is the second most powerful waterfall in Europe, just behind the Rhine Falls, Switzerland. Dettifoss is famous for its power rather than its beauty. Even visitors to the waterfall have testified to feeling the earth underneath them vibrate while standing close to the waterfall.

The waterfall is found in the Vatnajökull National park and is a part of the Diamond Circle. Hence, the best time to visit is during the summer months. The Dettifoss is very close to the Selfoss, an equally beautiful but smaller waterfall. Thus, with the amount of mist and water in the area around the waterfall. Also, visitors can bring a change of clothes, dry gear for their cameras and wear warm clothes.

However, staying overnight can be problematic as there are no hotel accommodations with proximity to the waterfall. In the nearest town, about 30kms away, in addition, there are guesthouse options and campsites. See the wonders of Ikogosi waterfall,

Must See In Abu Dhabi 10 Most Interesting Places.