MUST VISIT MOSQUES IN THE UAE

MUST VISIT MOSQUES IN THE UAE

Mosques are highly essential in Islam. Building mosques is the first and most important step in establishing a Muslim community because adhering to Islam’s system, doctrine, and values provides stability and cohesion. The tie of brotherhood and affection that exists among Muslims is on Islamic principles and etiquette. Nevertheless, this bond is mostly formed in mosques. The sense of familiarity and brotherhood cannot bring Muslims together until they meet several times in a mosque, regardless of their inequalities in status, wealth, and consideration.

Messenger of Allah (peace be upon him) wasted no time building the mosque to realize all of these meanings in the Muslim community and their new state. Though non-Muslims do not enter some areas, many have opened their doors to show the world the diversity of their traditions. Affordable Destinations for Cosmetic Surgery 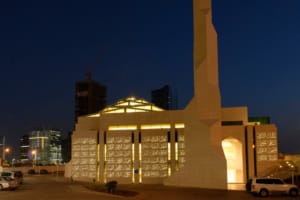 Al-Aziz Mosque in Abu Dhabi has a total size of 5100 square meters. The mosque has three floors and can accommodate a total of 2270 worshippers. This Mosque, also portrayal as a landmark in Abu Dhabi, is a unique and noteworthy architectural feat. Thus the outcome was a 515 square meter exterior LUCEM facade made up of 207 pieces of 1800 x 1400 x 40 mm each. Indeed, every single part is unique in every way since it has a varied shape and structure, therefore making the entire idea one-of-a-kind globally.

Luminous calligraphy becomes a feature in Abu Dhabi, the capital of the UAE. First, during the evening and night, when the walls are illuminated, each panel of the F-facade is unique, projecting Arabic letters from different angles. Second, calligraphy on each panel protrudes at a thickness of 30 mm out of the light-transmitting facade panels. Third, forming during the day hours a stunning optic of a natural stone facade with a state of art design also incorporating the shadows of the calligraphy created by the sunlight.

LUCEM façade changes color depending on the angle of the sun. It appears in a warm sand color during the day with no direct sunlight on the façade. Also, in a strong soil color during sunset with intense direct sunlight on the façade at a 90-degree angle on the surface. After sunset, or during twilight in the morning or evening, it appears sand-grey to grey. With the darkening of the night, it appears as an outstanding natural occurrence in buildings. Broadly gleaming and glowing in a soft, warm white hue, like the moon and stars, the Arabic calligraphy, at night with the darkest ambient light. 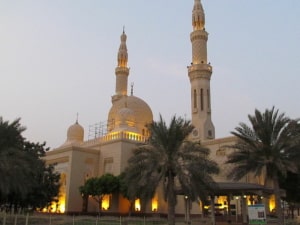 Jumeirah Mosque is a must-see since it is a Dubai landmark. Erected in the late 1970s and is in accordance with the Fatimid Medieval Tradition. It has also been designated as a National Treasure and Attraction by the United Arab Emirates. Although it is not the UAE’s largest mosque, it is indeed one of the few that is open to non-Muslims. The Sheikh Mohammed Centre for Cultural Understanding is hosting the Visit Programme.

Under the umbrella of “Open doors, open minds,” mosque visitors have the opportunity to watch the prayers, learn more about the rituals of worship, and ask any questions they may have. However, the stone structure of the Jumeirah Mosque exhibits historic Fatimid architecture.

Visit tours are available every day except Friday and begin promptly at 10 a.m. Therefore, there is no need to register ahead of time. Instead, prepare to register at 9:30 a.m. and enjoy Emirati snacks and hot drinks. At 10:05 a.m., the doors will close and reopen at 11:15 a.m. Every day, there is just one guided tour. The entrance charge is 20 AED per person, with children under 12 entering for free.

Lastly, the mosque grounds opens 24 hours a day. Thus, you admire the stunning architecture of the Jumeirah Mosque from the outside any day of the week. The nearest Metro station is Al Jafiliya, which is located at the end of Jumeirah Beach Road. You may either take a short cab ride to the mosque or switch to the C10 RTA bus from there. Although they recommend modest clothes, you can borrow national attire at the entrance. For a modest charge, the visit lasts around an hour. 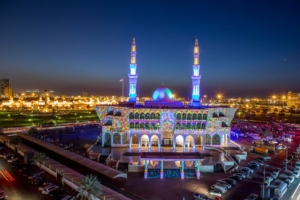 Built in 1987, King Faisal Mosque was Named after King Faisal of Saudi Arabia, it used to be the largest in the Emirate of Sharjah and the country.

Apart from accommodating male and female worshippers, the mosque has other purposes; Sharjah’s Department of Islamic Affairs and Awqaf occupy the second level, a general library, and offices. Also, the library has up to 7,000 books on Islamic studies and thought in addition to cultural, literary, and scientific works.

Men can pray on the ground and first levels, while ladies can pray in the basement. A large donation area beside the women’s prayer hall, it is ran by Sharjah International Charitable Organization, which also has offices in the building. With a large number of pillars assisting in the organization of worship positions in rows. King Faisal Mosque is unusual because most Millennial Worship sites are not so. You may also see why your trip to Bhutan is worth it. 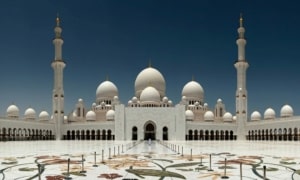 Sheikh Zayed Grand Mosque, indeed one of the world’s largest mosques. This is the only mosque that depicts the unique connections between Islam and other global civilizations. This mosque is both magnificent and also inspirational. The UAE’s founder, Sheikh Zayed bin Sultan Al Nahyan, had a specific goal for this mosque: first, to combine architectural forms from many Muslim civilizations. Second, honor cultural diversity by creating a haven that is truly welcoming and inspirational in its foundation.

The mosque’s architects were British, Italian, and Emirati, with design ideas borrowed from Turkey, Morocco, Pakistan, and Egypt, among other Islamic countries. The result is, of course, a breathtaking, gleaming architectural marvel. Completed in just over a decade, built to embody Islam’s foremost message of peace and tolerance and welcome people of all beliefs.

Welcoming mosque’s open-door policy encourages visitors from around the world, from families to groups, solo travelers to celebrants, to not only witness its beauty but also gain a deeper understanding of the emirate’s cultural beliefs in a space that encourages open dialogue. The Sheikh Zayed Grand Mosque can welcome up to 55,000 worshippers and visitors every day.

Its 1,096 amethyst-and-jasper-embedded columns. The 82 white marble domes, reflective pools, gold-plated Swarovski chandeliers, iconic prayer hall. The courtyard features one of the largest marble mosaic artworks globally, making it a truly stunning place to explore and take photographs. The mosque holds a Guinness World Record for the largest hand-woven carpet. It also boasts one of the largest chandeliers in a mosque. Don’t miss the calligraphy encircling the hollows of its domes, etched with verses from the Quran and painted with gold leaf in An-Naskh lettering. Sheikh Zayed Grand Mosque 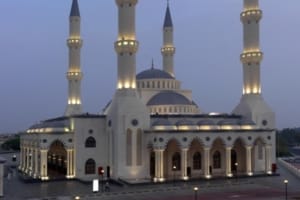 Popularly known as or themed after Turkey’s Blue Mosque. This is a 2000 people capacity mosque. The Al Farooq Omar bin Al Khattab Mosque, which was found in 1988 and expanded in 2003. It was ultimately restored and opened in Al Safa in 2011. This mosque takes pride in being the third mosque in the world to welcome inquisitive tourists and non-Muslims.

Its architecture exemplifies the diversity of designs, with interiors that include Andalusian and Turkish details, as well as a plethora of spire-like minarets.

This religious place & Centre is a tourist attraction. A tourist icon and an Islamic and cultural center where huge groups of visitors flock to see it and take tours. There is a creation of field tours in its corridors led by highly trained and qualified guides.

Cultural guides at the mosque are enthusiastic about informing tourists and visitors first about the mosque’s history, second, architectural designs used in its construction, third Islamic decorations and paintings engraved on its walls, fourth the etiquette for entering the mosque and fifth, general concepts of the mosque’s role in the Muscat region during the tour. Thus, in addition to lecturing on the tolerant teachings of Islam and the deep-rooted Arab customs and traditions of the United Arab Emirates, learners will be able to learn about the mosque’s role in Muslim life. The mosque tour lasts 45 to 60 minutes.

Mosques are open daily from Sunday to Thursday.

13 trips to book a year in advance