Cano Cristales: The Most Beautiful River in the World.

Cano Cristales: The Most Beautiful River in the World, located in Colombia. 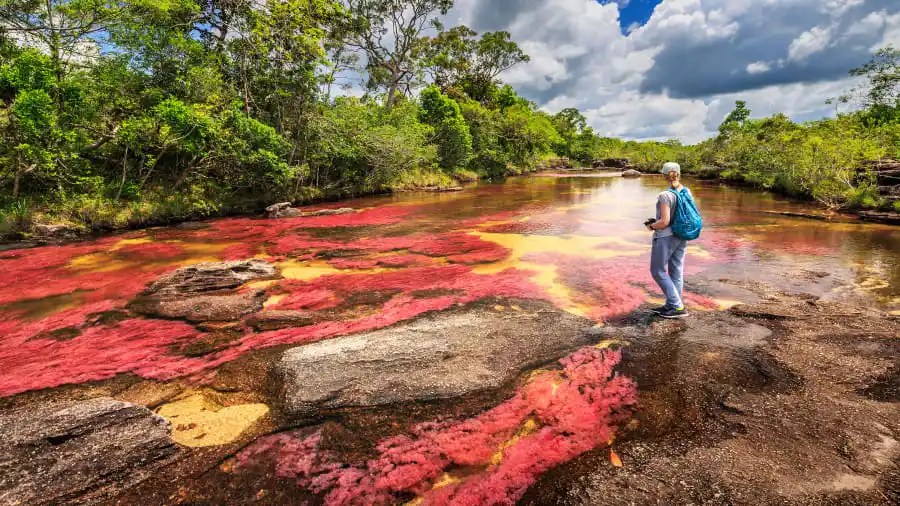 Cano Cristales translates literally as Crystal Channel in English is a Colombia river flowing through the Serrania de la Macarena province of Meta.  Caño Cristales is also a tributary of the Guayabero River. Because of its vibrant colours, the river is also known as “River of Five Colors” or the “Liquid Rainbow.”

The dazzling and colourful Caño Cristales is Colombia’s most stunning natural wonder,the world’s most amazing river and aslo described as the river that escaped from heaven. It is one of Colombia’s most distinctive and thrilling tourist destinations, and it is well worth a visit. See my other article on Zanziba, Tanzania amazing vacation.

Facts about Cano Cristales: The Most Beautiful River in the World

The river stunning vivid colours; vibrant yellow, green, blue, black and red shades quiver from the bottom. Furthermore, the Rivers Liquid Rainbow is due to a one-of-a-kind phenomenon. The red plants emerging in the riverbed  is Macarenia clavigera while river’s other colours come from the black rocks, green algae, blue water, and yellow sand, creating an iridescent effect.

Surprisingly, there aren’t fish or other sea animals at the river’s bed, allowing visitors to bathe and swim in Caño Cristale without disturbances.

Caño Cristales is a fast-flowing river with so many waterfalls and rapids. The small circular pits in Caño Cristales, known as giant kettles, can be found in the riverbed, created by pebbles or blocks of harder rocks.

There are a handful of reasons why you should plan a trip to Caño Cristales; a stunning natural wonder, very photogenic and lovely to swim in a tranquil and relaxing atmosphere to ease up all your stress.
Oh Yes! Seeing the deserts and wildlife in this area is enough reason to visit Caño Cristales. Of course, there are so many fun activities to Explore that just Caño Cristales.

On the first day.

However, on a visit to Caño Cristales, there is more to see and do than see the “Liquid Rainbow.” The Serrania de la Macarena is the name given to this region. It is unusual because it is the meeting point of three distinct habitats rich in flora and fauna diversity: The Andes Mountains, the Amazon, and the Llanos Orientales (Eastern Plains).

On the second day.

You will also go horseback riding and boating along the Guayabero River, where you can see the region’s animals such as birds, babillas, and turtles, among others.
The next thing to do in this area is to visit the other sites around Caño Cristales that are very lovely, such as; Caño Escondido, Cascada de la Virgen, Pianos, and the Cascada de Los Cuarzos.

When is the best time to visit Caño Cristales?

Plan your vacation during the summer to avoid missing out on this colourful spectacle. This river transforms into a flowing rainbow in July, August, and September, between the rainy and dry seasons. The colour eruption of an endangered water species, Macarenia Clavigera. There isn’t enough sunlight in the winter, and the river floods very quickly. However, when summer starts, the plants blossom and bloom.

The sunlight brings many colours, mostly red but also white, black and yellow. The year-round temperatures of lows averaging 21–23°C and highs 26-32°C.

When planning a trip to the most beautiful river in the world, keep in mind that the red algae that give the river its iconic colours only bloom at certain times of the year. According to most organizations, visiting the river is best in its stunning red-state between late May and late November, but the peak season is between July and October. So, if you want to see Caño Cristales in its entirety, make sure to book a tour at this time. Also click on See the most beautiful Fjord in Norway for more amazing adventure.

How to Locate Caño Cristales.

While finding Caño Cristales is a challenging task. The fastest way to get there is by plane; La Macarena Airport (LMC IATA) is a regular commercial operator. With three flights a week from Bogota on Sunday, Wednesday, and Friday and two flights a week from Medellin.

Second, Villavicencio Airport (VVC IATA) is another choice, where you can take a bus from Bogotá to Villavicencio and then fly to La Macarena. Many private operators travel from Villavicencio’s airport. A tour company usually charters them, but they will gladly do a private charter for you if you contact them.

You may also go to the airport and talk to them, but you may end up spending the night in Villavo. They are significantly more costly than Satena, but they are more flexible and do not require you to adhere to Satena’s scheduling.

Take a plane from Villavicencio to La Macarena. Ticket prices range from 450.000 and 700.000 COP. These are smaller planes; they are not regular planes, so you can only bring a 15kg/33-pound bag and a 5kg/10-pound carry-on. They are more like 32 passenger planes. From here, you can hire Tour services to guide you through your vacation.

You can also get there by land, but it is not advisable due to poor road conditions. In addition, the vehicle could get stuck in the wet mud during the rainy season. The best part is that you can compare flights, book very cheap flight, and even get part of your fare back ask a discount code for future booking by clicking on this link here.

The airline would need evidence of your vaccination against yellow fever for at least ten days before your flight. In addition, if you make your arrangements, the number of visitors to Caño Cristales each day, and you must obtain a permit before entering.

However, since you need to go with a guide or organization, it is more realistic to call them and have them obtain the permit on your behalf. There are only a few hostels and guesthouses in Bogotá that can pay for a private flight and all other arrangements.

When you arrive at La Macarena airport, which looks like a backyard, you can make official plans at the tourist desk for a guide to drive you into the park or simply book a guide before arrival by clicking here. The majority of them speak Spanish, but we also provide English-speaking guides.
The vast majority of visitors book a comprehensive tour of Bogotá. However, Caño Cristales is one of the few places where taking a tour rather than flying alone is faster and less expensive.

The cost of a three-day tour is approximately COP $1,200,000-1,400,000. (including flight, accommodation, food, all activities by October 2021). Travelling by land is the only way to get there less expensive than taking a tour (see below). Every Sunday at 7 a.m. Overland Jeeps depart from Vistahermosa, taking 12 hours on an inferior path impassable during the rainy season.

It’s a short 4-hour drive, and there are several shared pickups available every day.

The total travel cost for an individual is $1,097, and it includes the following;

What you should pack in the Bag

Knowing that it is a warm climate, it’s sunny throughout the day, and the sun shines brightly. Therefore, it is vital to visit along with the following items:

These are helpful information about ATMs and banking. Bring cash with you to avoid having issues if the ATM in La Macarena is not working. Yellow Fever vaccination is required, although it is not always requested.

Also, to avoid being in a tight spot, get vaccinated as soon as possible (it is always free and made available at the airport by the Red Cross), and bring proof of vaccination with you. When visiting Caño Cristales, the only telecom operators that serve in la Macarena are Claro and Avantel. You can get a SIM card and a data plan for about $5 in the area. Some basic informations are also here.

Disclaimer: This article contains some affiliate links, and I get little commission from a successful transaction.

Best Places To Visit In Jamaica.